The Bluebook is a set of guidelines for legal citation for referencing official documents. It is the style manual that governs how American legal documents are cited in legal memoranda, court documents, and law journals. It is published by the editors of the law journals at Columbia University, Harvard University, the University of Pennsylvania, and Yale University. The Bluebook is currently in its 20th edition having been updated to reflect changes in the legal sphere and serve evolving authors’ needs.

Both law students and professionals use it in court proceedings, police reports, and official government documents. Additionally, this method applies to the citation of news coverage regarding governmental occurrences. The Bluebook citation format is a referencing system which involves a set of rules for referencing among law students and those in practice. In other words, it is the legal way to reference scholars of law.

Don't use plagiarized sources. Get Your Custom Essay on
The Bluebook: Legal Citation 101
Just from $13/Page
Order Essay

It contains something known as blue pages which act as rules and a thesis regarding the references made by lawyers and law to students. Both the Bluebook online and soft-copies illustrate numerous guidelines regarding the rules of referencing while producing legal writing. The first nine pages being general rules, the second ten pages talk about the required materials as the final two pages state the rules for citing international law papers and elements. There are also white pages which are academic rules and regulations for citation.

Where Is the Bluebook Used? 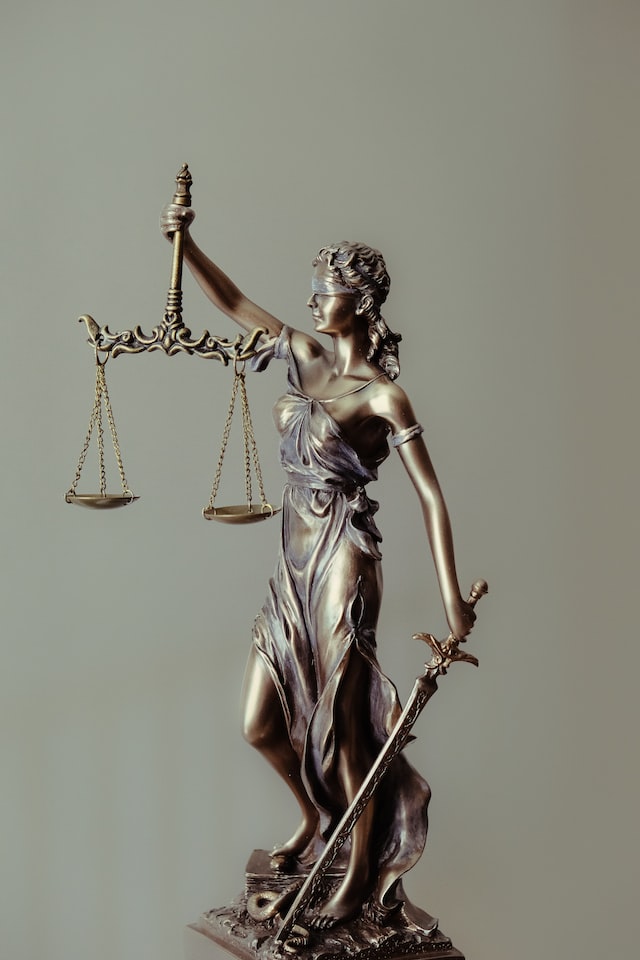 This set of guidelines applies to law students, professional judges, lawyers, law enforcement agencies, and politicians. The Bluebook is used to cite passages within legal writing; including sources made by officials, judges, lawyers, authorities, and news coverage of applied governmental situations. In university dissertations and documents produced by professionals. Hence, it is essential to learn to write under Bluebook legal citation.

A selected handful of law students manages the independently-run Harvard Law Review organization whose agenda is to produce and publish their journal. Each segment of this journal contains citations under the Bluebook journal abbreviations. These journals include various block quotations from multiple authors and legal cases.

How to Use the Bluebook?

Nitty Gritties from the Bluebook

According to the Bluebook format, the bibliography should incorporate citations at the end of a piece of writing. When it comes to the list, students and professionals are required to cover every citation which they have made from A-Z. It is necessary not to add page numbers; and the line which follows the first should be indented. As an option, the writer’s name can be written in a slightly bigger font.

When it comes to academic papers within the field of Law, footnotes should be included in succession to the information, and not prior. Remember to include the full names of each writer in their normal order. It is also essential to include your footnotes in numerical order while being indented. Keep in mind, footnotes should be included on the bottom of the page. As the writer, you are

permitted to use semicolons for multiple legal citations within a footnote.

When you do a supra citation, you have to use the same font specifications as you did in the original citation. What does that mean?  According to rule 15, both the author and the title of the book must be in small caps.  This rule is slightly different for cases, however. For the short form of a case, the general rule is to use the name of the first party, italicized. If the case was cited more than five footnotes ago, you cannot use a short form; you have to cite the whole case again.

Once you have cited a given authority in full once, you may use a short-form citation subsequently. The specific content of a short form citation is flexible, but varies by the type of authority being cited. Acceptable short forms for a given citation will be covered in each entry. Short forms may also use id to indicate that this citation is from the same authority as the previous.

Volume No. (if any) NAME OF AUTHOR, TITLE OF THE BOOK pg. cited (Editors/Translators Name, edition cited year).

The sample above is representative of all characteristics including caps and punctuations. The first name must always be written before the surname. For two authors, write both their names separated by „&‟. In case of citing a book that has been edited, the Bluebook directs that you write „ed. or „eds. after the name of the editor.

Name of Author, Title of Article, Journal volume no. ABBREVIATION OF JOURNAL Page on which Article Begins, Page Cited (Year).

Name of Author, Title of Article, ABBREVIATION OF JOURNAL, date of issue as appears in the cover, at first page of work, page cited.

Some journal articles are paginated consecutively through volumes while others start paginated with every volume. For two authors, write both their names separated by „&‟. For more than two authors write the name of the author that appears first followed by “et al.” 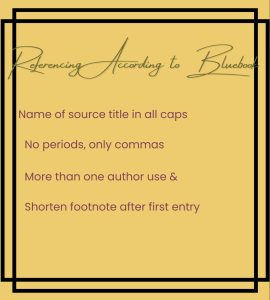 In the short-form citation of a case, you are free to shorten the case name to only the first party, or even an abbreviated form of that party’s title. If, however, the first party is a governmental entity, geographical unit, or other such creation, this may not be a helpful citation. (Since there are so many cases where the first party is, for example, the U.S. government, citing a case name as “United States” doesn’t narrow it down enough to be useful). In these cases, cite instead by the name of the second party.

When citing the constitution of a governmental entity, use the abbreviated title of the constitution, then specify to which subdivision of said document you are referring. Short form citations for statutes need to include the section number as well as the minimum information necessary to identify which of your previously-cited authorities the citation refers to.

In conclusion, following the specific guidelines, as stated by the Bluebook, enables the ability to write using law citations. The standard citation method used by both practicing professionals and students allows for the quotation of court cases, news ports, and statements made to the local authorities. Meaning, mastering this format brings the opportunity to boost your GPA with better references. It is also highly beneficial for legal practice in the future. Contact Custom Scholars for help navigating the Bluebook.