How to Write a Character Analysis Essay - Custom Scholars

How to Write a Character Analysis Essay

Major: These are the primary characters who drive the plot. There are usually only one or two main characters. The protagonist – the good person – and the antagonist – the bad guy or the villain – are the two most common categories of major characters.

Don't use plagiarized sources. Get Your Custom Essay on
How to Write a Character Analysis Essay
Just from $13/Page
Order Essay

Minor: These are the characters who assist in conveying the story of the main character by interacting with them and revealing their personalities, situations, and/or tales. They are frequently static (unchanging).

Static (unchanging): A static character is one who does not change throughout the plot.

Foils: are characters whose purpose it is to bring attention to the main character(s) in order to highlight the protagonist’s role.

How Do You Start a Character Analysis Essay

To begin writing a character analysis essay, you must first select a character to write about. Sometimes a character will be allocated to you right away. Consider characters who have an active role in the tale. The reader will be captivated since there will be a wealth of information about these personalities. 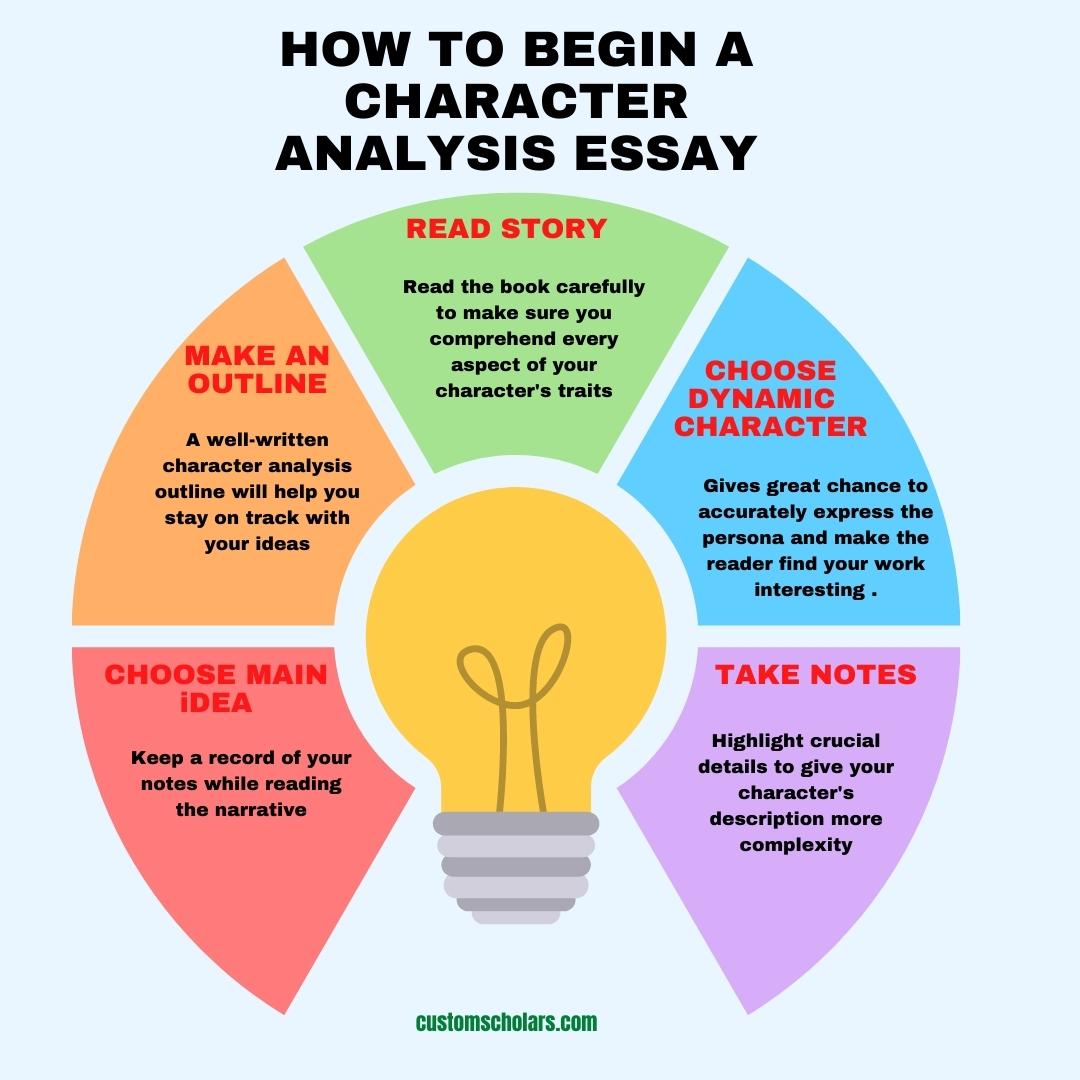 You may believe that if you have previously read the book, there is no need to do it again; but, now that you know which character you want to focus on, reading it again will provide several benefits. It will allow you to be more specific when reading the scenes that are directly related to your character and are vital for his/her analysis. Pay attention to every minute detail when reading the book to ensure you understand the full range of your character’s features.

It’s a good idea to go with a dynamic character. This does not have to be the protagonist, but a character that evolves a lot, grows during the novel, and is not dull and/or stagnant. This provides you with an excellent opportunity to completely portray the persona and make your work fascinating and engaging for the reader. If you pick a non-dynamic character, your essay may appear repetitive since your character will not end up doing much and will not be really active in the tale.

While reading, take notes or highlight/underline any and all of the important components of the tale. This will give your character description more dimension (s). You link your reader to the character by offering vivid and detailed instances, and the character comes alive in their eyes. After you’ve completed reading with your character in mind, go through your notes and write down the key notion about your character.

Keep a record of your notes while reading the narrative. Seek at them, pick the ones that are most typical of your personality, and look for trends. This will be your thesis statement. Then, you must back up your claim with instances and scenarios affecting your character.

If your character were Jem Finch from Harper Lee’s “To Kill a Mockingbird,” the core topic would be how racial tensions, societal injustices, and internal fights between public opinion, his own ideas, and what is truly right create his own character. Customscholars can assist you with your history essay. Please notify us if you require proofreading, editing, or writing assistance with your essay.

Writing a literary analysis blueprint is one of the most important phases in writing. A well-written character analysis plan can help you organize your thoughts and ideas. 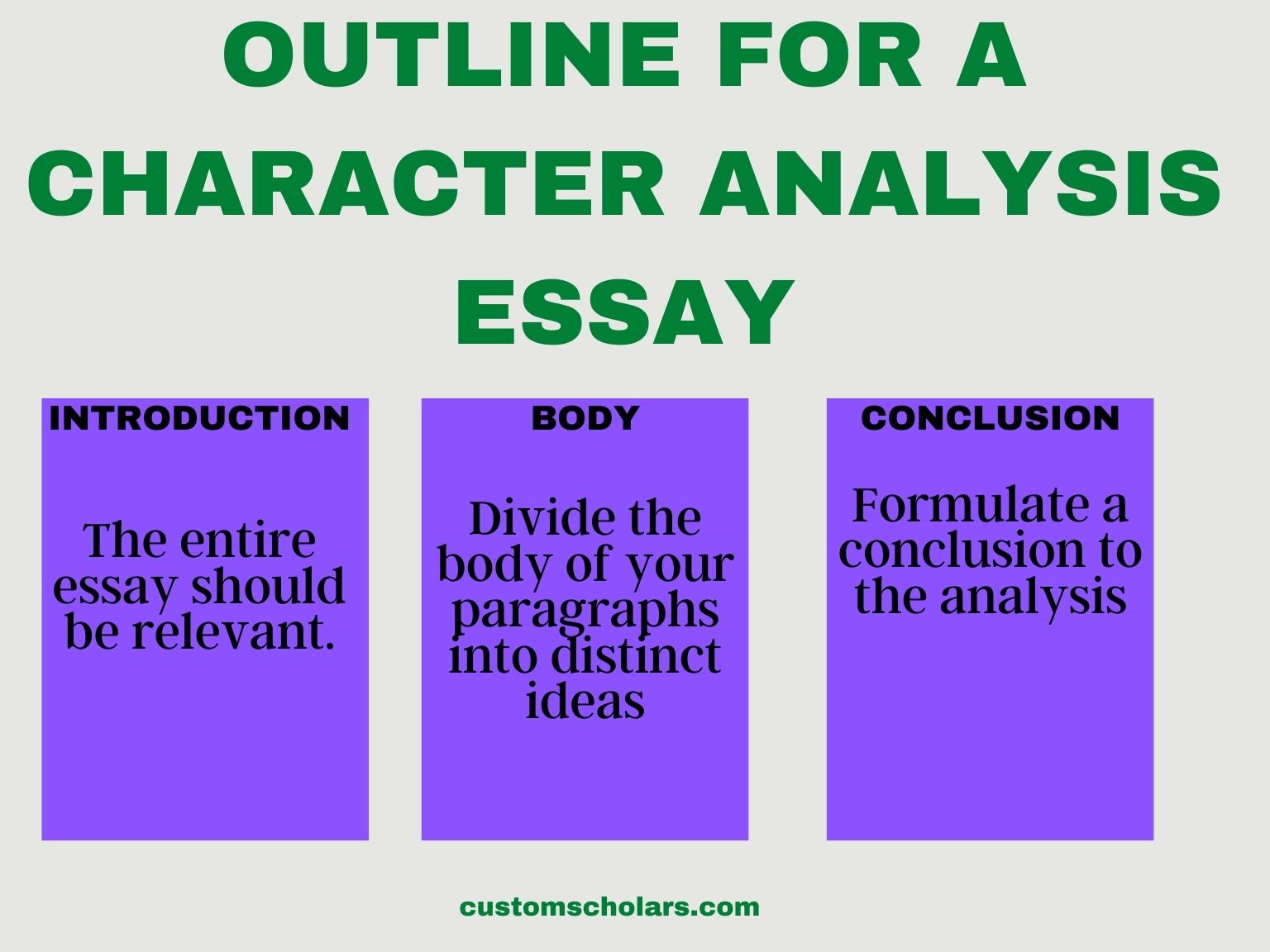 Make your paper’s introduction succinct and relevant. It should tie your entire article together and pique your audience’s attention. Write a brief summary of the character in question. Don’t forget to add a character analysis thesis statement that argues for the character’s significance in the context of the narrative.

Divide your body paragraphs into many themes or sections about the character. Examine your professor’s rubric to ensure that you will be able to complete all of the needed tasks. You should also be given questions to respond in order to further frame your analysis. The body should provide answers to the following questions:

It’s time to learn how to write a conclusion for a character analysis. Your conclusion should also connect your concepts and form a final analytical statement. Mention aspects of the character’s conflicts that we could encounter in real life. You may also write on how a character should have reacted in a given scenario.