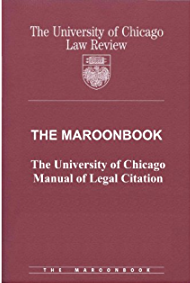 The Maroonbook is literally maroon and it offers an alternative mode of citing legal writings. The University Of Chicago Manual Of Legal Citation (or the “Maroonbook”) is the official citation guide of The University of Chicago Law Review and has been used by other journals.

In the beginning, the Maroonbook was meant to address issues of simplicity in legal citation. The legal sphere found that the available citation styles were unable to accommodate the growing number of electronic/online sources while also remaining simple and uncomplicated.

Don't use plagiarized sources. Get Your Custom Essay on
The Maroonbook: 15 Rules That Simplify Legal Citation
Just from $13/Page
Order Essay

Therefore, two decades ago parties in the legal studies at the University of Chicago came together to develop a guideline that they would adopt. Many believed that the problem lied in attempting to create a cover-all citation guide.

The Maroonbook takes a different approach to legal citation. It offers a simple, malleable framework for citation, which authors and editors can tailor to suit their purposes:

First: Sufficiency – The citation should give the reader enough information to locate the cited material without further assistance.

Second: Clarity – The citation should be comprehensible to the reader, using plain English, following a well-recognized form whenever possible, and avoiding the use of confusing words.

Third: Consistency – Citations should be consistent within a piece, though they need not be uniform across all legal materials.

Fourth: Simplicity – Citations should contain only as much information as is necessary to meet the goals of sufficiency, clarity, and consistency.

The Maroonbook Rules of Legal Citation

{(Optional) name of act} ({(on first reference) popular name or popular abbreviation or nickname given by author}), {title or volume number} {codification} {subdivision} ({publisher if an unofficial codification} {year}).

Comparing the Maroonbook to the Bluebook

Both style manuals were created for legal citation. While one was created by the Harvard Law Review, the other was created by the University of Chicago Law Review therefore, it is expected that there will be differences. The people at UCLR sought to create something simpler. To begin with, even though they both borrow heavily from the Chicago Manual of Style they were developed with different intentions in mind.

The Bluebook was quite hefty even at the beginning and has grown even bigger over the years as electronic sources entered the scene and referencing needs changed. It has been hypothesized that the creators of the Bluebook aimed to provide a comprehensive style manual which rather than provide clarity and guidance on legal citation, confused everyone. The common joke is that the Bluebook’s index is longer than the whole Maroonbook. In fact, it is that heft that led to the development of the Maroonbook.

While the Maroonbook is shorter and therefore a lot less tedious than the Bluebook, it is still quite complex. Although, there is an index and table of contents that help readers navigate the manual. It can still be a little confusing and frankly, not quite worth the time to peruse. This is where we come in. No need to inundate your day with tedium. Work on the important stuff and leave the boring annoying tasks to us.